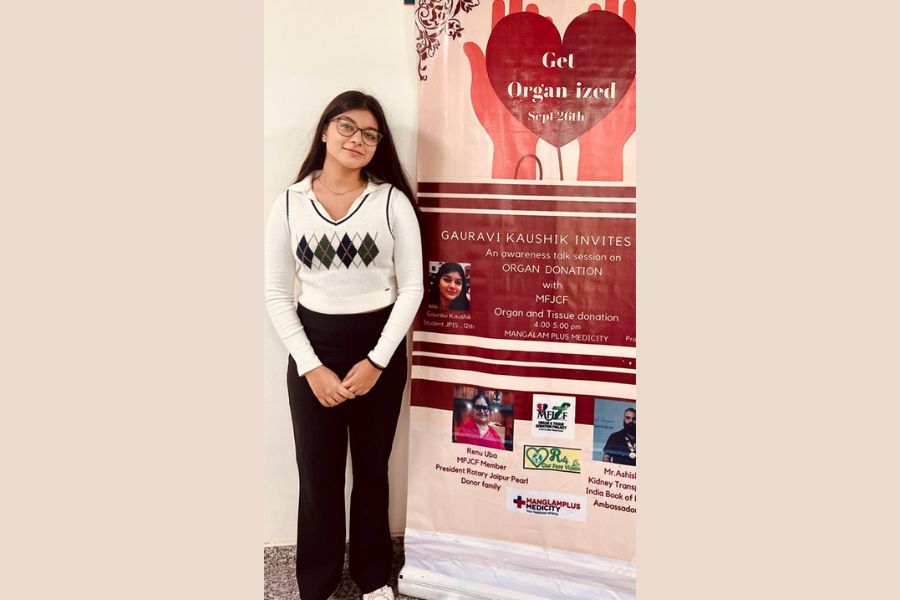 October 8: A little girl, ten years old, was amazed to see her elder sister collecting kitchen waste for a few days and was thrilled when she got to know that this kitchen waste would be converted into something very useful, which was the manure for plants.

That day she found her vision, and she realized that she would embark on this journey towards making this society, this country and finally, this world a better place to live in.

This is the story of Gauravi Kaushik, who is now a 16 years old teenage high school student.

She is the Co-Founder of NGO R-4 Our Fore Vision, and she has done many campaigns to help society.

The Four Rs of this NGO stand for REDUCE, REUSE, RECYCLE, RESTORE and here she worked for sustainability along with volunteers under her.

They did Tree plantations.

They made people aware of the importance of waste segregation by collecting the waste during city Marathons, the theatre festival Jairangam and many other events.

They also collect old festive clothes and footwear every year from 2016 to now during Diwali, and after washing and packing them, they distribute them to people in need of them; named this campaign MERI BHEE DIWALI in which their vision is to see every child be happy on The festival of Diwali.

Gauravi’s empathetic nature and her vision for sustainable living made her start a campaign which not only provided free Sanitary pads for women and girls who needed them but made it a point to educate them about these reusable cotton pads, which can solve the two problems- affordability, and sustainability. Affordable reusable menstruation – this is what came out to be a “Pack of confidence”.

For this campaign, she collected around 20k from crowd funding and bought these reusable napkins from Project Qadira.

Gauravi wants to study human anatomy and molecular and cellular biology in college, and she keeps herself updated about the current Affairs of the medical world, which that strikes her the most was the lack of organ donors in the world as it took her back to the time when she went through surgery at the age of 12 years, and her appendix was removed from her body. This surgery made her think that what if it had been some other organ and not her appendix? This thought hit her hard, and she started thinking about the suffering of people whose vital organs are failing. She gathered more and more information on organ donation, and she thought why not educate people about the possibility of the ‘reuse’ of the organs? She decided to make more people aware of the noble work of organ donation. Just a few days back, she organized a talk show about the possibilities and process of ORGAN DONATION with an NGO, MFJCF, which is working very actively for this cause.

Gauravi’s little steps are making people around her more n more aware of these sustainable ways of living. She believes in this quote and leads her life by it, “when we dream alone, it is only a dream, but when many people dream together, it is the beginning of a new reality” And Gauravi is transforming her dream of a better world into a reality.

If you have any objection to this press release content, kindly contact pr.error.rectification[at]gmail.com to notify us. We will respond and rectify the situation in the next 24 hours

13 years old Sarthak Nehete who acted as as the Chief Airport Officer Kolkata, December 5: To give wings to the imaginations of children, on World Children’s Day, November 20, which coincides with the anniversary of the adoption of the UN Convention on the Rights of the Child (UN CRC), a special celebration was held at…

New Delhi: Yuvika Sehgal is a chess prodigy and an exceptional all-rounder at the age of 14. She is not only good in academics, but she is also well-versed in the moves in chess. She is the recipient of numerous awards and accolades in chess tournaments in India at such a young age. Born and…

Representing India is our own city’s man

Mr. Sufir Singh Kapur, resident of Sector 20 Chandigarh November 29: Mr. Sufir Singh Kapur, a resident of Sector 20 Chandigarh, has been selected as one of the delegates of the United Nations’ Best Diplomats Organization, which will be conducting a conference and a four-day simulation session of the United Nations in Kuala Lumpur, Malaysia,…